Action inquiry is a lifelong process of transformational learning that individuals, teams, and whole organizations can undertake if they wish to become:

Action inquiry can gradually become a moment-to-moment way of living whereby we attune ourselves through inquiry to acting in an increasingly timely and wise fashion for the overall development of ourselves, our colleagues, friends, and family, and the wider world.

Bill Torbert Talks About Action Inquiry and His Work Today
In the following interview, Bill answers some questions about what Action Inquiry means, and what he is doing today to bring forth its principles to individuals, teams and organizations throughout the world.

Bill: In principle, anyone in any family or organization can practice action inquiry. Gradually, they develop first the reliable capacity to make incremental (single-loop) changes to increase timely, effective action. Next (though few people or organizations today progress this far) comes the reliable capacity to make transformational (double-loop) changes; still later, a few humbly face the challenge of ongoing (triple-loop) listening into the dark – into the present moment and into the “Volume of all Possibilities” from which the future emerges.

How has Action Inquiry impacted the developmental work done with executives and leaders? How are you continuing your work with organizations and leaders?

Bill: You can get a good sense of the answer to your first question by reading the April 2005 Harvard Business Review article “Seven Transformations of Leadership” or my 2004 book written with some of the same associates who today make up the corps of Action Inquiry Fellows. In short, we have shown statistically that leaders who voluntarily engage in intense action inquiry activities during their workdays and special retreat workshops transform to later action-logics. We have also shown statistically that CEOs at the Strategic-Systems Oriented action-logic and later are the only ones who are reliably successful in promoting organizational transformation.

What assessments are you now using in conjunction with your leadership development programs?

Bill: We base our leadership development work on the Global Leadership Profile, our version of the most thoroughly validated transformational leadership measure in the  social scientific literature. Seeking this form of feedback on one’s current leadership action-logic is often the beginning for adults of intentional commitment to their own further development… which can be pursued through our coaches, our workshops, and our organizational consultants, as well as through your own initiatives.

Since June 2008, you’ve been Professor Emeritus of Leadership at the Carroll School of Management at Boston and have led a number of so-called Alchemists’ Workparties. In 2004 you published Action Inquiry: The Secret of Timely and Transforming Leadership, which caused wide ripples in leadership development circles. What is the main thrust of your work today, in 2012?

Bill: In addition to consulting and research, I’m intrigued by the transformations that we can encounter in our later years and that I believe global society is today also confronting. I call this the “Third Age.” I believe that as human civilization enters the global era, it is also entering its Third Age. Humanity was in its First Age of Dependence until about 1500AD. Then markets, democracies, and the empirical sciences began to generate the Second Age of Independence that most of us as individuals experience during our middle years. The transformation toward our Third Age moves us toward Inter-Independence – toward the exercise of mutual inquiry, power, and love – toward full responsibility for our life as a whole with others and our home planet.
I am carrying on this deepest action inquiry into Inter-Independence primarily through by-invitation 3-day Alchemists’ Workparties that all Action Inquiry Fellows have participated in and now join me in hosting. These occasions, when all participants function as co-leaders, challenge us to practice (and to see how we fail to practice) mutually-transforming inquiry, love, and power with one another ongoingly. The question arises, can death itself become our ultimate transforming moment if faced consciously in the company of friends?

Surprisingly, action inquiry is a virtually unknown process… perhaps because learning how to practice it from moment-to-moment is no easy trick. Action inquiry is not a process that can be followed in an imitative, mechanical way, learning a few ideas and imagining that parroting them back to others occasionally means one is doing action inquiry.  Rather, action inquiry is a way of learning anew, in the aliveness of each moment, how best to act now. The source of both its difficulty and its potential is that action inquiry requires making ourselves, not just others, vulnerable to inquiry and to transformation. The rewards of action inquiry are a profound sense of growth in personal integrity, in interpersonal mutuality, and in organizational and environmental sustainability. 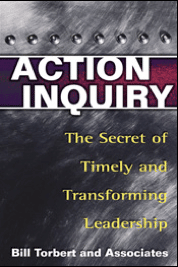 Bill Torbert and associates illustrate how individuals and organizations can progress through more and more sophisticated “action-logics” — strategies for analyzing the world and reacting to it — until they will eventually be able to practice action inquiry continually. Offering action inquiry exercises at the end of the chapters, the book moves from junior managers beginning to practice action inquiry through CEO’s transforming whole companies, to world leaders transforming whole countries, as exemplified by Czech president Vaclav Havel.